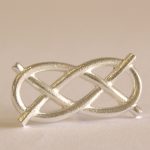 A heraldric symbol associated with the Butler family since at least Tudor Times, the Ormonde Knot features prominently in plasterwork installed by Thomas Butler (1531-1614) into Ormonde Castle.

The knot itself joins two pieces of rope but will not jam, even after carrying a significant load or being soaked with water.

Created in 2017 for the 50th anniversary of the Butler Society, the knot is made of sterling and hallmarked.

The knot was designed and produced in Kilkenny Castle by Eimear Conyard, Jewellery and Goldsmithing Course Manager at the Design and Crafts Council of Ireland.